COVID-19 Everything that changes in the state of emergency: dismissals, strikes, requisitioning, schools and confinement 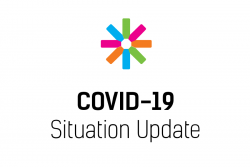 The President of the Republic has renewed the state of emergency, with amendments negotiated with the Government, which sees their powers strengthened. The Executive can review the situation of prisoners, change school cycles and examination dates, "compulsive confinement" is no longer just in hospitals or at home and limitations on the right to strike are extended "to all essential public services. The mobilization of workers is extended, but dismissals are limited.

The presidential decree renewing the state of emergency, which was negotiated and obtained a favourable opinion from the government, has five essential novelties that greatly strengthen the powers of the executive.

The document extends the "compulsive confinement" of the home or health establishments to "other places defined by the competent authorities"; it extends the limitations of the right to strike "to all essential public services"; it allows the Government to change dates of school periods, "adjust methods of assessment or recalculation of examinations"; it takes "exceptional and urgent measures" to protect prisoners and prison guards; and it also extends the possibility of requisitioning workers to the staff of homes for the elderly, the disabled, young people at risk or street support.

In the article on limitations to workers' rights, the decree suspends "the right of trade union associations to participate in the drafting of labour legislation to the extent that the exercise of such right may represent a delay in the entry into force of urgent legislative measures" arising from the state of emergency. In other words, the decree legally frames the entry into force of the lay-off, which would imply union negotiation because it is an amendment to the labour code, but the rush to implement it could thus dispense with such negotiation.

The possibility remains for public authorities to mobilize public and private sector workers to guarantee the functioning of vital sectors, health, economy, critical infrastructure and maintenance of public order, but the "social sector" is added. The suspension of the right to strike is extended from the previous decree - which provided for this suspension for the health sectors and vital to the economy - to the "essential public services".

The decree also provides some guarantees for the workers concerned, in particular by 'limiting the possibility of their employment relationship being terminated'. But the government is also authorized to limit "the accumulation of functions between the public and private sectors," that is, in the health sector they may be called professionals who accumulate in both sectors for temporary exclusivity in the SNS.

There is also another novelty in this chapter: "The regime of temporary duration of the normal working period or suspension of the employment contract may be extended and simplified, due to the fact that it concerns the employer".

Marcelo Rebelo de Sousa begins by justifying the "indispensable maintenance" of the state of emergency. "Despite the exemplary behaviour of the Portuguese, and without prejudice to the positive effects that they can already achieve," the decree states, and the health authorities have determined "the transition from the containment phase to the mitigation phase", the level of prevention must be "increased, otherwise the effort made so far will be wasted.

There follows an explicit reference to the risks of the Easter period: "(...) traditional time of meeting families of international circulation", it is essential "that this time does not lead to an increase of contacts between people and, consequently, of infections".

IN EDUCATION, ALL POSSIBILITIES

Renewed for another 15 days, the 'new' state of emergency has news regarding the Education sector. With the schools closed, the decree opens space for the Government to decide how it will project the end of the school year.

It is now possible for the Executive to "postpone or extend school terms, adjust assessment methods and suspend or recalculate examinations or opening of the (next) school year, as well as any adjustments to the model for access to higher education". That is, all open.

The decree maintains the limitations on travel rights currently in force, which may be imposed "by the public authorities", as well as sanitary fences, but where the hypothesis of "compulsory confinement in the home and health establishments" was read also "in another place defined by the competent authorities".

The possibility for public authorities to determine the "obligation to open, operate and operate undertakings, establishments and means of production or to close them" is extended to "services".

Regarding the possibility of price control already provided for in the previous decree, the current one adds "combating speculation or the hoarding of certain products or materials". It also provides that "the terms and conditions of concession contracts may be temporarily amended, or certain services may be required to be performed on a permanent basis or waived".

The decree ends with the guarantee already contained in the first law on the state of emergency: the rights "to life, personal integrity, citizenship, freedom of conscience and religion" as well as the freedoms "of expression and information" will "under no circumstances" be affected.